Iceland has taken the bold decision to remove plastic packaging from its own label products by 2023 for one simple reason: because we care. I’m a keen surfer so I may be more aware than most of all the plastic detritus in the sea – but we’ve pretty much all watched or at least heard about Sir David Attenborough’s Blue Planet series, and seen the sort of damage plastic waste is doing to the oceans. Insidiously, it is also breaking down into small particles that are being consumed by marine life and re-entering the human food chain through fish and seafood. The consequences could ultimately be catastrophic for humanity as a whole, and as the father of young children I want to do everything I can to protect their future.

Just consider the facts. Every bit of plastic ever produced still exists, unless it has been incinerated, and more of it has been produced in the twenty-first century so far than in the whole of the last one. We’re dumping a truckload of it into the sea every minute, and it is going to stay there for hundreds of years. It’s crazy, and it has got to stop.

Clearly someone needs to act – so why not us? 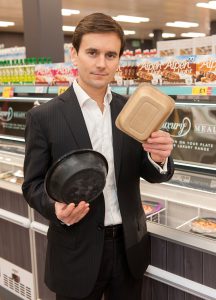 It’s actually easier for Iceland to take action than it is for most companies because we are a privately owned, family business. We’re not answerable to shareholders focused on this year’s profits, so we can and do plan for the long term. In fact we’ve got a proud history of world firsts. Back in the 1980s we were the first major retailer in the UK to act to take artificial colours, flavours and non-essential preservatives out of our own brand food, and to ban mechanically recovered meat.

In 1998 my Dad – who founded Iceland in 1970 – became very concerned about genetically modified ingredients, which he called ‘Frankenstein food’, and decided to ban them from all Iceland own brand products. A whole host of experts lined up to tell him it was impossible, but he did it. And, amazingly, within a very short time every other food retailer in the UK followed our example, because their customers demanded it.

On plastics, customers currently don’t have a choice and we want to give them one. All of them. We’re a mass market value retailer, but we don’t think that concern for the environment is confined to those who can afford to shop at Whole Foods or Waitrose. Our consumer research supports this belief, with 80% of those interviewed saying that they would support a supermarket that decided to go plastic-free.

It’s not going to be easy, but it can be done. We can move relatively quickly in some areas, and two new meal ranges we are launching next month will be in paper-based trays rather than the ubiquitous black plastic ones that almost no one can recycle. In other areas there are greater technical challenges, but new technologies and materials are developing fast and our stand will encourage them to come on stream even quicker. In some cases, we can also go back to materials and methods that worked well before plastic came along – for example using cellulose, which is made from wood, and returnable glass bottles.

Making this change is going to cost money but we are determined that our customers will not have to foot the bill. Obviously we hope that more people will choose to shop at Iceland as a result of our decision, but we’re not trying to steal a march on our competitors. We genuinely hope that they will follow our example – and soon – and we are happy to collaborate with them to make this a reality.

Plastic-free aisles in supermarkets aren’t a bad idea, but they’re not enough. Nor is recycling, which is really just recycling the problem. Not nearly enough plastic is currently captured by recycling in the UK, and until this year we were largely exporting the problem to China for them to deal with. Now that they have banned imports of waste, some other developing countries are stepping forward to take it on, but this cannot be any sort of solution to the problem. Only reducing the amount of plastic we produce and use will do that.

This is going to be an exciting and challenging journey over the next five years, and I very much hope that you will join me on it. We’re going to be honest and tell you about our progress as we go along – and about the failures, too, if we have them.

We’re determined to avoid unintended consequences that end up transferring the problem somewhere else. Packaging does serve a purpose, in ensuring consumer safety and reducing food waste, and we certainly don’t want to endanger either of those. We will also ensure that all the alternative packaging materials we use are from sustainable sources, and that they can be fully recycled at the end of their life.

I am passionate about making this change and I hope you will be, too. Please support us and come back to read more here as our project develops.

Help me in the fight against litter!

Putting our own house in order