In the short time you take to read this blog an area of Indonesian rainforest the size of 12 football pitches will have been burnt or bulldozed to make room for palm oil crops, destroying precious habitat for some of the world’s most endangered animals.

That’s equivalent to 146 football pitches of rainforest being cleared every hour, or 3,500 every day. But that’s only at today’s deforestation rate – global demand for palm oil is set to double by 2050. The situation is unsustainable and urgent.

That is why Iceland has just announced that we will be the UK’s first major supermarket to stop using palm oil as an ingredient in all our own label products by the end of 2018.

We’re already over 50% of the way there. But this has been no easy feat – palm oil is ubiquitous and can be found in up to half of all supermarket products; everything from washing-up liquid to lipstick, ice cream to biscuits.

Considering the fact that the world is designed around palm oil, people told us that removing it simply wouldn’t be possible – not only would it require redesigning recipes, but also changing manufacturing lines. Well, our world-class chefs and technicians have worked tirelessly on product reformulation, whilst maintaining the same quality and taste in all products. This has taken thousands of hours over the last 18 months to achieve.

Palm oil has been ‘back-doored’ into the global supply chain over the last 20 years as the world’s vegetable oil of choice because it is cheap, easy to use in the manufacturing process, and is very high yielding.

The problem is that palm oil is grown almost exclusively in tropical rainforest areas, 85% of it in Malaysia and Indonesia. Tropical rainforests are the ‘crown jewels’ of our planet – despite covering only 2% of the earth’s surface, they contain an estimated 50% of all our biodiversity.

To make way for these vast palm tree plantations rainforest needs to be cleared – chopped down or simply burnt, incinerating everything along with it. This also releases enormous amounts of stored carbon into the atmosphere (which is the reason why Indonesia regular features as one of the world’s worst carbon emitters). 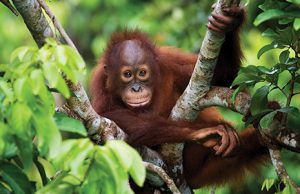 Animals such as the Orangutan, our closest cousins in the animal kingdom, are now critically endangered and could soon become extinct in the wild. This has not been a slow decline over a long period of time – in less than 20 years the Bornean Orangutan population has halved to perhaps only 70,000 today.

I wanted to see the issues for myself and so late last year visited West Kalimantan in Borneo, which is the front line of the palm oil industry. It is an environmental disaster zone. We witnessed illegal deforestation, industrial-scale draining of peat swamps, the devastation wrecked by forest fires, displaced communities and animals being killed and brutalised.

Up until now customers have had no say in the matter. Yet we surveyed 5,000 consumers, and found that 85% of them do not want palm oil in their products. For the first time consumers shopping in a UK supermarket will now have a choice.

We do believe that there is a role for palm oil, but the current growth and unquestioned use of it in so many products is unsustainable. We have proved that it does not necessarily have to be used, and therefore shown that it is possible to reduce the current runaway demand.

But we are also sounding our own alarm call to the palm oil industry. We are calling on the big corporations to adopt immediate zero deforestation policies.

Iceland has no appetite for extinction. We feel so strongly about this that we’ve invested many millions to make this happen, and we will not pass a penny on to our customers. It’s just the right thing to do.

Why bioplastics are not necessarily the answer

Why is Iceland against palm oil?