In the 13 years since Iceland returned to Walker family management in 2005, our company has paid almost £1.4 billion in UK taxes: //about.iceland.co.uk/our-performance/

We are happy to do this because we recognise the moral obligation that wealth creators owe to society as a whole. Not trying to dodge our tax bills is absolutely part of our overriding commitment to Doing The Right Thing, which is also the driver of the major environmental initiatives on plastics and palm oil that we have announced this year.

Business rates are a significant element of our annual tax bill, currently costing us over £40m each year for our 900+ stores in the UK. It’s a big number – and bear in mind that we are the smallest of the UK national food retailers, with a market share of just over 2%.

But these rates are an outdated tax mechanism designed for a different era, when ‘bricks and mortar’ shops were the only type of retailing that existed. 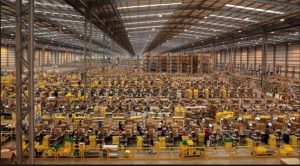 The system takes no account of the rapidly changing environment which has seen online’s share of UK retail sales double over the last five years to account for nearly 20% of the total market in 2018. This share will continue to grow as more and more customers opt for the transparent value and convenience of the web – in the understandably beleaguered department store sector, online sales are growing by more than 25% per year.

I shop online myself and I have absolutely no desire to stand in the way of customers getting what they want. Indeed we have a fast-growing online business ourselves.

But I do have a big problem with the online behemoths simply not paying their fair share of tax. They use our national transport infrastructure for free. If their warehouses catch fire, they won’t put the blaze out on their own. Their employees need the support of the NHS and other public services just like everyone else’s.

Whilst the online companies, including some of the biggest in the world, get a free ride, traditional retail has seen increases in rates year after year. Indeed, as central government funding has evaporated over the last decade, rates has become the principal revenue-raising lever for local authorities.

This growing burden is simply killing our traditional retailers. And if that doesn’t bother you, it should: because it is also killing our high streets and communities, and costing a huge number of jobs.

There has been no other cost headwind that has come close to explaining the retail crisis we have seen unfold in recent years. In the last decade alone we have lost once familiar household names including Woolworths, C&A, Comet, Focus, Phones 4 U, Tie Rack, Barratts, BHS, Jaeger, 99p Stores, Toys R Us, Maplin and Poundworld. Many others have survived only by downsizing, changing hands or securing reduced rents through Company Voluntary Arrangements – this year’s rescues of House of Fraser and Evans Cycles by Sports Direct being the most topical examples.

So I was naturally glad that the Chancellor finally addressed the situation in last week’s Budget with his proposed digital services tax, from which he hopes to raise £400m a year once it takes effect in April 2020.

That £400m a year sounds a lot, but it’s peanuts. As I said before, we are a relatively small retailer, and our own business rates bill alone is equal to 10% of it.

Mr Hammond also announced £900m of business rates relief for small businesses with a rateable value of £51,000 or less – which is good news for pubs, corner shops and kebab shops, but will do nothing for struggling multiples like House of Fraser and Debenhams, where the great bulk of retail jobs are at risk.

I am a realist and so cannot see scope for a dramatic reduction in the taxes levied on retailers, given that non-domestic rates are currently generating nearly £25bn a year for local authorities, and play a key role in funding all their work from roads to refuse collection, schools to adult social care.

But we do need a much more level playing field for those retailing through physical stores and those selling online. The Chancellor argues that an online sales tax would only penalise consumers, but you can apply precisely the same argument against business rates and every other tax that retailers currently pay. Ultimately they are all costs that we have to recover from the consumer through selling prices, once we have done our best to maximise our own efficiency.

The details will need work but at the very least we should be debating the potential for an overall sales tax to ensure fair play and a fair tax contribution by all retail businesses. As things stand, Iceland is paying nearly ten times as much in business rates alone as Amazon paid in UK corporation tax last year.

Does that sound fair to you?

Slice of beer, anyone?

Thank you for helping to stop palm oil causing deforestation