We’ve been lobbying for a Deposit Return Scheme for longer than any other retailer in the UK. We were the first to announce our backing for Greenpeace’s call for a UK-wide scheme in November 2017, and also the first to show practical support for this through the installation of trial Reverse Vending Machines (RVMs) in stores in England, Scotland and Wales. 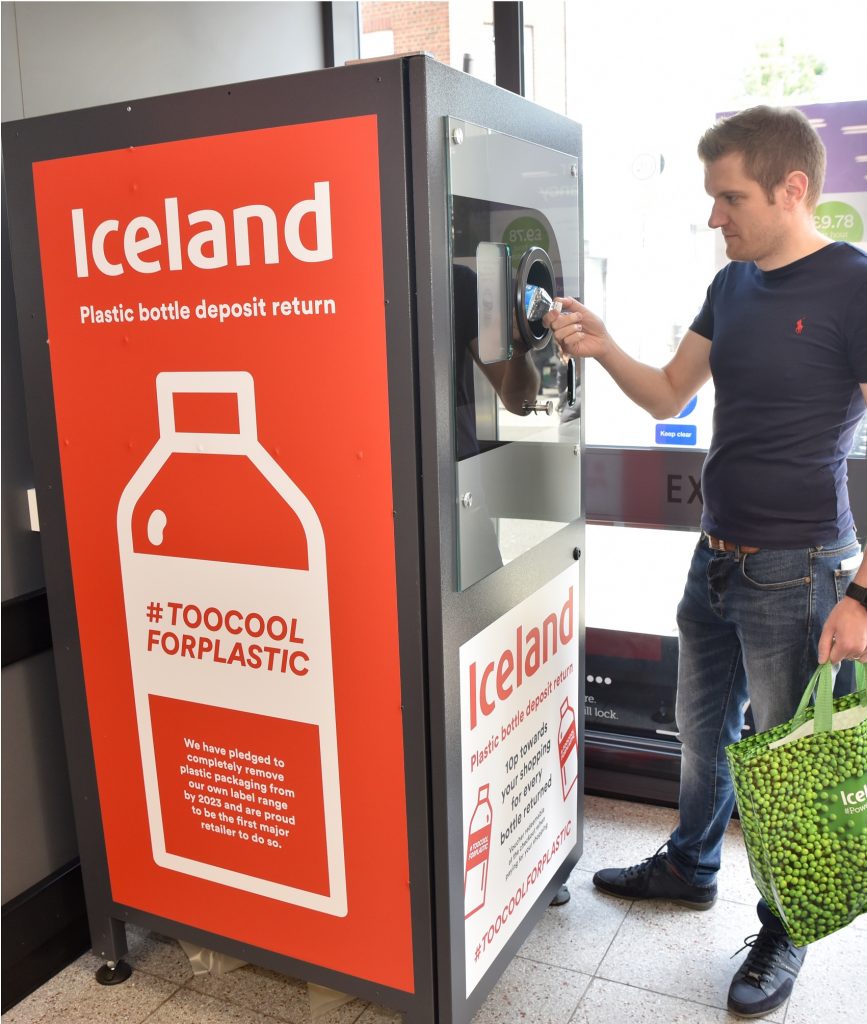 The first six months of this trial to December 2018 showed very strong public support for the concept and keen interest in the
technology, and saw the recycling of more than 310,000 plastic bottles through just four stores. We have since extended the trial for a further six months and expanded it to Northern Ireland, with the installation of a machine in one of our stores in Belfast. We’re currently collecting 100,000 plastic bottles a month through this trial.

Against that background, you’d probably expect us to be cracking open (returnable) bottles of Champagne after yesterday’s announcement from the Scottish Government of their ambitious plans for a Deposit Return Scheme. And we do indeed support it – but with a couple of important reservations.

The first and most significant concerns the inclusion of glass in the proposed Scheme. Our trial has focused on PET plastic bottles because these are the prime cause of the critical problems of ocean pollution and onshore littering that we are striving to address. We accept all bottles bought from Iceland up to 3 litres in size, and strongly oppose any effort to dilute the Scheme to cover only smaller ‘on the go’ containers.

We’d be very happy to see the Scheme extended to include aluminium and steel cans, but glass would create real problems – because it is heavy, breakable (creating obvious health and safety risks), and because its inclusion would require the installation of much larger RVMs than could be accommodated in a typical high street Iceland store. This would not only preclude our participation as an RVMs provider, but other high street, community and independent retailers, too.

The alternative of simply forcing high street retailers and village shops to accept returned containers at the till, and store them for collection, would be a logistical and health and safety nightmare.

In practice, customers would inevitably gravitate towards large RVMs installed on out-of-town retail parks, to avoid the inconvenience of returning heavy glass bottles to stores without convenient car parking. This would impose further pressure on footfall in an already struggling high street, and seriously disadvantage older and poorer customers without access to a car. It would also add needlessly to vehicle emissions.

The current kerbside collection system for glass is working well in most local authority areas, and should be made universal. There is evidence from overseas that while a DRS for plastic greatly increases the quality of the returned material, allowing it to be recycled into new plastic bottles, collecting glass in this way actually reduces the quality of the recyclate compared with kerbside collection.

This is why we are strongly urging the Scottish Government to reconsider its decision to include glass in its proposed DRS.

The other major challenge with which we and every other retailer and manufacturer will have to contend is the hideous complexity that will arise if Scotland forges ahead on its own. Every single bottle or can we sell will require dual labelling, depending on whether it is to be sold in Scotland or the rest of the UK. Most retailers, like Iceland, serve both English and Scottish stores from the same depots, creating further complications and added costs. The potential for cross-border fraud is obvious.

This is not an argument against a Scottish DRS, but it is a powerful one for adopting the same standards right across the UK and for accelerating the development of plans for the introduction of a DRS in England and Wales.

Please let us get on with that as quickly as we can.

One of our watchwords at Iceland is KISS: Keep It Simple, Stupid. By keeping the Deposit Return Scheme simple, focused on the problem that really matters, we will make it easily understood and accessible to all. I strongly believe that this is the course most likely to engage the wholehearted support of the maximum number of consumers and all categories of retailer. This support is surely key to delivering the substantial increase in recycling rates, and the consequent reduction in ocean pollution and littering, that must surely be our top priority.

Palm oil was all about Doing The Right Thing, not a marketing gimmick